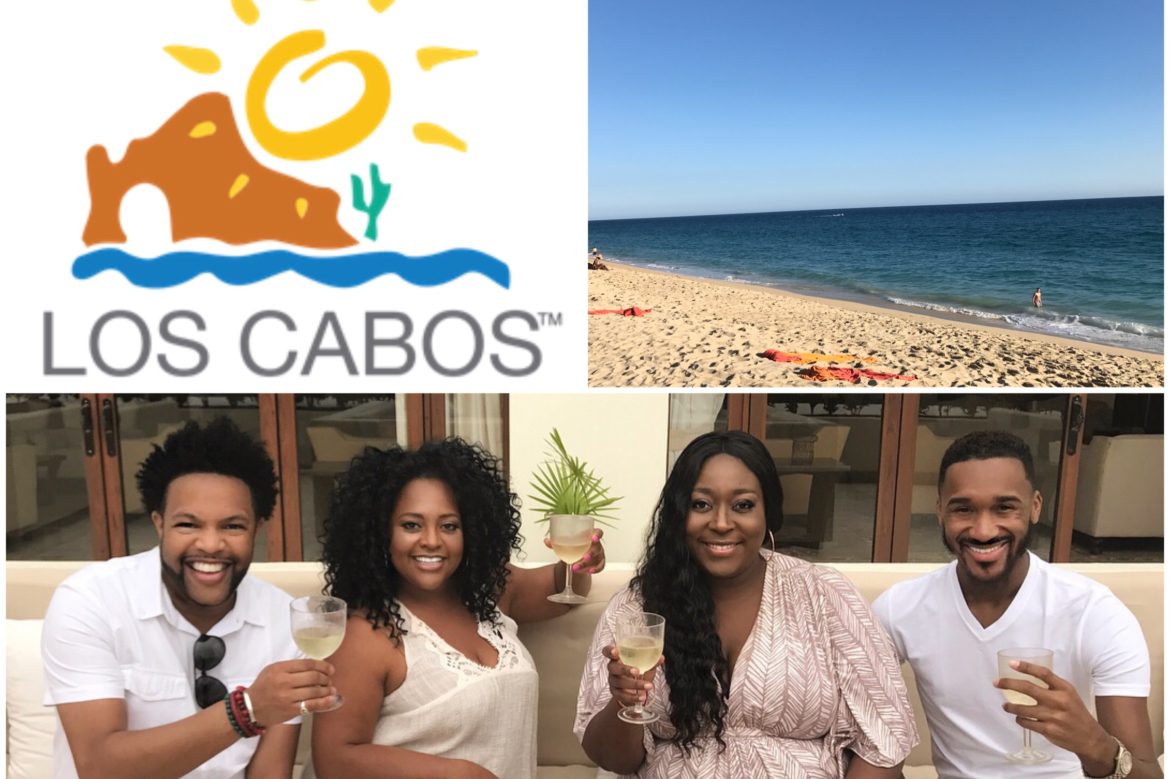 Poolside In Paradise: Why Los Cabos, Mexico Is The Perfect Holiday Escape

I celebrated this past New Year’s Eve in a way like I had never done before – traveling abroad!

I brought in 2018 in Los Cabos, Mexico with my friends Loni Love, Sherri Shepherd and Alex Hill and we had a spectacular time. There were many highlights—too many to name here—but let’s just say we had so much fun that a video I shot of the ladies while we swam at Secrets Puerto Los Cabos Golf & Spa Resort ended up going viral. (Watch it below)

This is why you need to pin your #wig ladies – but at least @comiclonilove saved it! And Lord help the patron who tried to take my hair! Swipe to see the shenanigans.) #adventurewithsherriandloni #thickgirlsrock #LosCabos #GraciasLosCabos #LosCabosToday #vacation #SecretsPuertoLosCabos

That was one of several hilarious adventures we had together while enjoying Cabo, as Americans affectionately call it.

We also had a champagne toast and danced at Me Cabo’s Blue Marlin Ibiza Los Cabos bash on New Year’s Eve featuring British deejay Paul Oakenfold. Everything about this elaborate celebration and its exciting fireworks show was a stark contrast to the way all of us would usually bring in the new year.

And apparently, Cabo was quite popular for the holiday season, as we were not the only Americans there living it up in paradise.

“The Best Man Holiday” star Sanaa Lathan was also staying at that resort and posted several sexy swimsuit photos on Instagram during her time of relaxation.  She also took in the New Year’s Eve bash at Grand Velas and was spotted taking photos with Doolittle after the show.

Lathan wasn’t the only one posting sexy swimsuit shots while vacationing in Cabo. “Power” star LaLa Anthony got in on the action with several seductive bathing suit shots of her own while spending her holiday getaway there.

Rapper Flo Rida performed a concert at Mandala Los Cabos on New Year’s Eve and “The Long Road Home” actor Patrick Schwarzenegger was among those partying in the crowd. He shared photos showing Cabo’s beautiful sunrise, as well as picture in an affinity pool that would make anyone want to go for a swim.

“Claws” star Niecy Nash hosted a couple’s getaway for friends at Marquis Los Cabos. TV host Terrence J, “Queen Sugar” star Omar Dorsey and “Fear The Walking Dead” star Colman Domingo and their significant others were among those who traveled with Nash and her hubby Jay Tucker.

ESPN’s “SportsCenter” co-host Jemele Hill also spent her New Year’s Eve in Los Cabos. The popular sports analyst shared photos of her adventures in the Mexican municipality on social media, including a photo of her feeding a seal with a fish while out on a private boat tour.

And while Cabo was a popular destination for celebrities looking for fun in the sun this past holiday season, it isn’t just a place for Hollywood stars and musicians to escape to. Everyone should vacation there at least once and experience the breathtaking beauty this part of Mexico has to offer.

Here’s my guide for where to stay, what to do and places to eat when you get to Los Cabos, Mexico:

WHAT TO DO: Going whale watching and private sailing with Cabo Sailing was such an enjoyable experience. We started out sailing from Marina Cabo San Lucas and viewed the picturesque beaches and high-end residents that lined the shore as we headed towards Lover’s Beach. We also saw a group of sea lions gathered on some rocks as we approached the famous arch of Cabo San Lucas. We then headed out into the Pacific Ocean where our whale watching experience began. We spotted at least three different whales from a distance, before having two whales swim side-by-side very close to our boat in sequence. It was quite a remarkable experience. I strongly suggestion this excursion during your visit to Los Cabos. If you get seasick or have motion sickness, take some ginger or the necessary medicine before your trip—it’s worth it!

WHERE TO EAT: Dinner at Don Sanchez was nothing short of amazing. We had Executive Chef Tadd Chapman’s special four course menu, and he customized a special menu for Shepherd since he knew she’s a vegan. But our regular menu started with a Surf and Turf Taco (combined crispy soft shell crab and rib-eye chicharron); followed by Christmas Farm Salad (heirloom tomatoes, spiced pumpkin seed,

butternut vinaigrette, goat cheese and jocoque, arugula and fried sage); a main course of Tamarind Ancho Braised Short Rib (barley risotto with mushroom and avocado, arugula, truffle essence and crispy parmesan); and was capped off with a dessert called Mulege (dates and red wine spanikopita, fit compote and cinnamon ice cream). Chapman’s contemporary cuisine was decadent and succulent. Everything was fresh and organic. And the wine pairings with each course were perfection. And the decor of the establishment was as exquisite as the food. Situated in a Hacienda-style courtyard, the restaurant’s high ceilings are adorned in wood and bamboo with earthy chandeliers and invoking an outdoor feel despite being covered.

WHAT TO DO: Art Walk San Jose del Cabo was an engaging experience while visiting Los Cabo. We were able to tour the gallery district of Cabo and take in a wide range of art and exhibits. In addition, there were artisans, eccentric street performers, musicians and other attractions as we walked through the multi-block area that makes up Art Walk. Both locals and tourists engaged and enjoyed the variety of attractions offered in this cultural experience that embodies the creative nature of Los Cabos. Definitely something first-time visitors to the island should explore.

WHERE TO EAT: Chef Angel Carbajal has launched a brand new restaurant in the heart of the downtown area of Cabo San Lucas that offers a dinner menu with bold,

unique pairings and flavors. Chef Carbajal prepared a tasting menu to showcase his eclectic approach to cuisine, with dishes that ranged from Beat Salad with Yogurt & Cherry Tomatoes, Salmon Tartar, irresistible Mussels in a Pot and a Braised Short Rib shank to die for. The hip, modern decor has industrial accents and uses it massive wine collection stacked up two stories on the wall as decoration. In addition, after getting a full stomach, you can dance off the calories at the third floor lounge called Fat Tune.

TRANSPORTATION: If you need transportation while in Los Cabos or just want to prearrange your rides to the airport, TransCabo Destination Management Company is an exceptional company with impeccable service. We had a great driver named Pablo who knew so much information about Cabo and was the consummate professional. Plus it didn’t hurt that we were driven around the entire time in a Cadillac Escalade.

WHERE TO STAY: Secrets Puerto Los Cabos Golf & Spa Resort could be described as heaven on earth. This tranquil, luxury AAA Four Diamond resort is the perfect escape to paradise. Set along the Pacific coast in the exclusive Puerto Los Cabos area, Secrets is an adults-only, all-inclusive resort nestled in a gated a community that you can only access if you’re staying at one of the two properties or a private residence on that side of the island.

The resort has 500 large rooms with amazingly comfortable pillow-top beds; a fully stocked refrigerator; snacks and satellite television. The room has a private jacuzzi on the furnished balcony, and each room has rainfall showerheads in the showers and oversized bathtubs with hot tub jets. The property boasts numerous restaurants with a wide range of cuisines; a nightclub and 24-hour room service. If that’s not enough, their spa is so amazing you could stay there all day and never leave—especially when you discover the hydrotherapy pools and hot tubs in the back of it. This resort is so self-contained; you could check in and stay five days without ever having to leave the property.

VIDEO: Take a closer look at the rooms at Secrets Puerto Los Cabos Golf & Spa Resort in the video below.