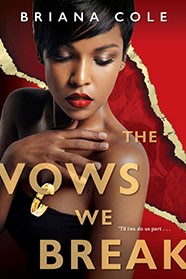 Dafina Reads: The Vows We Break

The divorce was just the beginning. . .

Kimera Davis had a plan to jump start her life and land on easy street. But a disastrous marriage has her making amends and picking up the pieces. It’s a struggle to balance her new responsibilities and her ex, who keeps pressuring her for another chance. All of this has her family scandalized, and with her minister father’s health suffering, trying to do the right thing is pulling Kimera and the only man she’s ever really loved further and further apart.

But as Kimera’s bad luck piles up, she senses there’s something more than faulty decisions at play. Someone’s playing a desperate, dangerous game with her life . . . and she’ll have to win if she wants to survive.